In 2005, the Tour de France held parts of two stages in Germany, in the cities of Karlsruhe and Pforzheim. I was stationed in Ramstein Air Base at the time and my family and some friends traveled to see the race. We found a stretch of unoccupied grass alongside the road, and waited to see the racers. Most importantly, we waited to see Lance. Bigger than life, as close to a celebrity that a sport like cycling could have, Lance Armstrong was cycling as far as Americans were concerned.

We didn’t really think when choosing our place to watch the stage, so it was on a stretch of downhill. The bikes came by fast, and we didn’t have very much time to see our favorite. All we knew was that the peloton was coming, and we started snapping photos. We shouted “Go Lance!” and chanted “USA USA” for the brief seconds that the Discovery Channel team passed by.

The racers passed, the party subsided. I bought a Discovery Channel team jersey. Eventually, Lance Armstrong would go on to win his seventh consecutive Tour de France. As far as biking was concerned, Lance was a homegrown hero.

I still root for him. 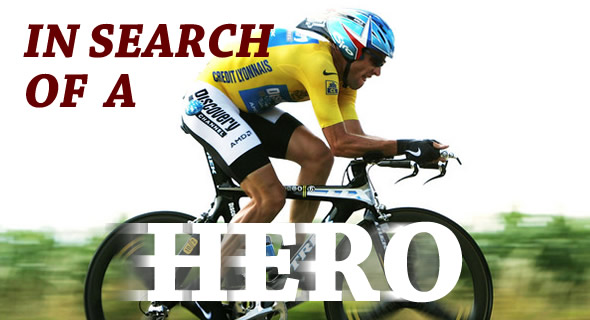 Now Lance is not superhuman, he’s not above the law, he makes mistakes and does stupid things like the rest of us. His personal life wasn’t perfect. But I really really wanted him to win. As all of the allegations of doping came and went, famous bikers fell, but never Lance. We (you know, Lance and me…) chalked it up to French chauvinism or jealousy from other riders… people just couldn’t believe that Lance could win seven titles without drugs or doping.

I am now coming around to the fact that maybe, just maybe, Lance Armstrong could have been involved in some shady stuff. It’s really hard to back someone for so long… and then finally come to the realization that I was wrong. I wanted there to be a hero. I wanted someone to be able to win without cheating. Lance Armstrong was that for me–the good guy who actually came out on top.

Until he wasn’t the good guy anymore.

And now I’ve realized how much we need heroes in life. People to look up to, people to root for, people to emulate. But the problem is, there’s no superhuman from another planet that does no wrong. There’s no completely selfless protector of Planet Earth that can protect us from every evil. The only heroes that we have in life are also human beings. Human beings who lie, screw up, are insecure, and are trying new every day to make it through and do some good.

So do we stop looking for heroes? Does cynicism creep in and we trust no one? Or do we simply realize that all heroes are flawed heroes… that they may be someone to be looked up to, but they’re not perfect.

So keep looking for those heroes. Just don’t put too much pressure on them.

Sorry Lance. I love you, but you’re just human. It’s okay. And I still fit into that team jersey.

…now where is my bike?