I originally wrote this in 2011, but it still holds true today. Our family is on the front line of a battle… but we’re still taking ground. If you’d like a copy of our family summer update, please let me know. 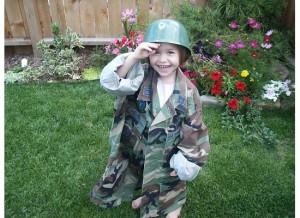 I’m often asked what it’s like to take your family into the unknown, into risky and uncertain and possibly unsafe situations. Well, I’m not going to sugarcoat it: it’s hard. It would be one thing going on my own, into dangerous situations, or places where I don’t know the language or where the nearest hospital is. But to take my wife, and small children? Sometimes, it really does seem like I am leading a patrol, bullets flying, with my family alongside me. The fact of the matter is that there will be casualties.

The Casualties of Spiritual Battles

– A month before we left for Spain, Ben broke his femur. We had been off of the Air Force’s medical plan for two months, and our medical insurance for Spain didn’t start until we arrived there. So Ben broke the hardest bone in the body, we’ve got no medical insurance, and the doctors in the ER want to CAT scan his whole body to check for other injuries. Did I mention we didn’t have insurance?

– Six months later, Ben steps barefoot on a metal grate in the backyard that has been baking in the sun all day. Due to the resulting burns, he loses all of the skin from the bottoms of his feet and he and Bec spend nine days in a dark hospital ward, not knowing if Ben will need skin grafts or stay for a month of treatment.

– Last Spring, we moved into a new apartment across our village, and immediately our family begins arguing, fighting, and generally hating each other. When we go away for a week, we invite a married intern couple to house-sit. Normally a very loving couple, they also feel like their time in the apartment was the worst week of their marriage. There’s just something about the atmosphere of the house that doesn’t sit well…

– Gabriella falls on the playground and we drive around to two different ERs before we get the help we need. I think we’ve been to every ER on the coast in the past two years.

– The ties between our family are the hardest hit. Emma and Gabriella, Bec and I, and our relationships with the kids sometimes seem strained if not broken. Why? Why is this so hard? I thought that “no weapon formed against us shall prosper”?

“Come And Get Us”

It’s a decision we make: To join into the spiritual battle that is raging around us, that has been going on for ages and is no less brutal than the battles of Iraq or Afghanistan. And it’s an even harder decision when we know that our family could be casualties of this battle. But here’s the deal: We know the score.

We Win This Thing.

We know that even as we take the casualties, we will not only recover and heal together as a family, but be better for it in the end. My family is growing tighter as our bonds are stretched, tested, and re-affirmed. Our testimony, confidence, and experience grows to share with others as we continue to lay it on the line and make even bigger risks for the sake of our calling.