That’s how this story starts. King David was growing old, and up until now, he hadn’t been clear to his court who would be taking the throne after his death. He had left it until it was almost too late, and someone else was about to take the inheritance. King David was being the classic dad: not communicating, not taking charge of the situation, and leaving things until they were too late.

Enter his “band of brothers.” Here were his mates, who weren’t going to let him go down like that. 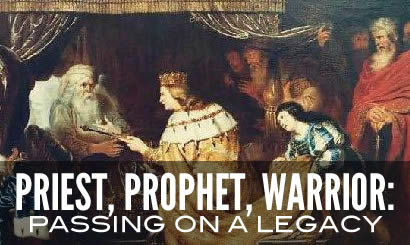 First, we have Zadok, the priest. His name actually means “righteous,” and he was the one entrusted with carrying the ark of the covenant – the presence of God on earth. And he would be the one that would anoint the boy Solomon as King. The priest was the embodiment of God’s presence and anointing.

Then, there is Nathan, the prophet. He was the one that had confronted King David years before on his sin with Bathsheba… and brought David the promise of God’s covenant: that a son of David would one day come and reign forever as the Messiah. So Nathan wasn’t afraid to get in David’s face with news–good or bad.

Finally, Benaiah. He is one of David’s Mighty Men and the captain of his personal bodyguard. To call this guy a warrior was an understatement–and he had King David’s back through thick and thin. Benaiah wasn’t about to let this threat to David’s kingdom go without a fight.

It was these men that David chose to be with him in his final days as he passed his inheritance–his mantle–to Solomon. And I think there’s a bit of mystery to be understood here, as well.

A Priest. A Prophet. A Warrior.

All facets of manhood, all inside of a man in separate measures. Each one of these traits is necessary and important as we seek to find and cultivate relationships with other men.

Do you have a Zadok in your life? Someone who can mentor you, teach you about God’s presence, and keep the standard high for you? Or a Nathan, who isn’t afraid to get in your face, tell you like it is, but can also listen to God’s call and help you live it out in your own life. And a Benaiah, someone who is strong, will defend you from attack, and is loyal to the end?

All of these traits are needed in our circle of friends. And all of these traits are needed when we need to pass on manhood to our sons. David realized that–and his challenge to Solomon before he died was to “Be strong; show yourself a man. …Walk in his ways, keep his commandments (priest), so that the promise to me be fulfilled (prophet), and use firm justice and mercy in equal measure (warrior)” -1 Kings 2:3-7)