I hope you’re enjoying this series on initiation. If you have, leave a comment. If you’ve missed some blogs, you can check them out here:
Part 1: Life Is Hard
Part 2: You Are Not That Important
Part 3: Your Life Is Not About You

Our entire lives are spent subordinate to someone: it could be a parent, teacher, boss, or pastor. Children need to learn discipline and respect for authority–the sooner the better. Too often these days, parental “fear-of-not-making-the-same-mistakes-of-my-parents” turns into a misshapen, upside-down relationship with their children. We are doing our children a disservice when we don’t teach them respect for authority.

Our children need to have proper relationships with parents and authority figures that emphasizes listening, learning, and honoring.

We Can’t Be Our Kids’ Friends

I believe this idea is the main cause of many of our children’s inability to adjust to an unfair, hard world where they are not the center of the universe. The relationship between parent and child was not created as a friendship. We can have a good relationship with our children without making them our peers. They will still respect and love us when they are adults if we discipline them as children.

The unfortunate truth is that the concept of authority has been lost in the younger generations.

As parents, we must shower our kids with love but at the same time, show them discipline. I am not talking about corporal discipline, but instead a discipline that doesn’t give them everything they want. This type of discipline, coupled with your personal example of self-discipline, is how children will learn that they are not in control.

Our children must learn that they our not our peers, and that they should listen more than they talk-especially to adults.

Stop letting your kids boss you around.

The parents of John Walker Lindh, the child of privilege turned Taliban terrorist, didn’t put their foot down when he announced he was going to drop out of school, didn’t interfere when he decided to become a Muslim, were actually proud of him for pursuing an alternative course. His mother said it was ‘good for a child to find a passion.’ They didn’t object when he asked them to pay his way to Yemen, nor when his new circle of friends included gunmen. For as long as he could remember, his oh-so-progressive parents had said yes to his every whim, fancy, and passion. The only thing they insisted on was that nothing be insisted on.

Newsweek calls it “truly perplexing” that Walker, who “grew up in possibly the most liberal, tolerant place in America . . was drawn to the most illiberal, intolerant sect in Islam.”

There is nothing perplexing about it. He craved standards and discipline. Mom and Dad didn’t offer any. The Taliban did. 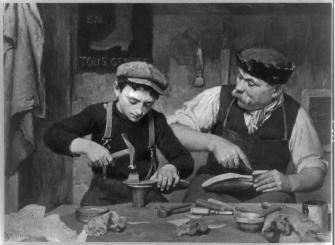 We’ve lost the concept of apprenticeships. Here, a skilled “master” took a child, usually his own, under his wing to show him the tricks of the trade and how to build upon the skill of the teacher.

These days, a father takes his car to a mechanic, immediately calls a plumber because he’s too busy at work, and uses a lighter to light the campfire because it’s faster. As fathers, we are losing the capacity to pass on essential abilities and skills to our sons.

The key is to bring our kids up in a atmosphere of learning, which includes values and morals along with practical skills.

Who Is Really Running This Show?

And no, it’s not you either.

Probably the most critical part of initiation is to show your children that There Is A God and You’re Not It. Listening, Learning, and Honoring God is the greatest trait that you can teach and model for your children.

Build into your child’s initiation a time of reflection, of listening to God’s voice, of learning from His Word, and honoring Him through worship and prayer. A great place for this is out in “the wilderness” where your children can find some natural beauty, quietness, and time for prayer.

You won’t regret it.

Continue the series on Initiation here: You Are Going To Die